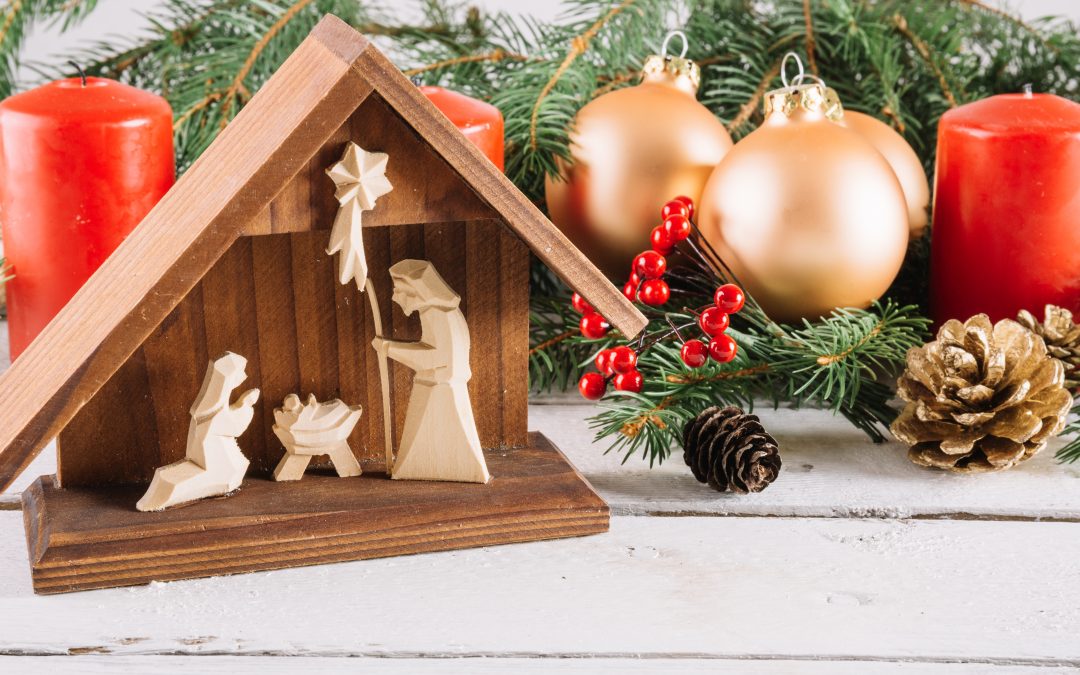 Now that the Christmas and New Year holidays are approaching, maybe you’ve asked yourself how Spaniards celebrate Christmas. What strange traditions do they have in Spain during the Christmas period?

How long does the Christmas period last?

Between those dates, the Spaniards have the following national holidays:

What do Spanish people do when they celebrate Christmas?

It won’t surprise you that in Spain, as in most countries, people celebrate Christmas parties by eating and drinking a lot.

However, there are some other, more curious, traditions that Spaniards carry out at Christmas:

This tradition is celebrated on Christmas Eve, but only in Catalonia and the Balearic Islands.

But what does it consist of?

It’s a trunk (yes, a tree trunk!) which has a painted face, a barretina (the typical red Catalan cap) and a blanket, just so that he doesn’t get cold. When he’s all prepared, the family places him in a corner of the house.

The children feed Tío Nadal daily with orange rinds and other fruits from December 8 until Christmas Eve. At that point he is supposed to be fat enough, by which point the parents will have hidden different presents under the blanket, which the children will soon discover.

Here´s the song that the children sing to Tió de Nadal while they hit him with a cane. Maybe you’d like to have a go at singing it? (Remember that songs are a great help when practicing Spanish).

I’m sure that if you watch this video of two little brothers trying to get Tió to “have a crap” you’ll want to sing it!

Here is the song in Catalan and in Spanish:

Once the children have sung the song, they take off the blanket and find the presents that Tio de Nadal has “crapped” for them (yes, you heard that right – that’s what the song’s all about!)

Watch this video where Viggo Mortensen explained just how strange this tradition is on American TV. Watch how everyone was left open-mouthed!

Although these days, the Tió de Nadal tradition is rather more materialistic, and directly related to gifts, he originally symbolized the light and warmth of the home, because, thanks to the trunk, you were able to heat the houses.

The Parade of the Kings

The Kings’ Parade is another of the traditions that the Spaniards never miss out on, and the children especially live it out with a great deal of excitement.

Spanish children wait anxiously for the evening of January 5th when the three wise men (kings) will visit them.

So, who are the Magi? According to the Bible, these kings were guided from the east by a star and came to the city of Bethlehem to bring the baby Jesus gold, frankincense and myrrh days after his birth.

It’s a parade in which people dress up as the Magi, and act out their arrival into Bethlehem, throwing sweets and small presents to those who await them.

A few days before the parade of the kings, Spanish children write a letter to their favorite king explaining the gifts they’d like to receive. The day after the parade, January 6th, is the most special day of the year for many Spanish children, who open the gifts that the Magi (supposedly) have left in their homes

Through the influence of Anglo-Saxon countries, the Christmas tree is the most typical decoration in the houses during the Christmas period.

However, as in other Roman Catholic countries, in many Spanish homes the people create and display Nativity scenes (belenes). These are scenes that recreate the birth of Jesus Christ in the city of Bethlehem, using wooden, clay or plastic figures.

The origin of the Nativity scene tradition dates back to the Middle Ages, to the Italian city of Greccio, where Saint Francis of Assisi, on Christmas Eve of the year 1223, celebrated mass in a hermitage, and the first birth of Jesus was recreated.

What other curious traditions do they have in Christmas nativity scene?

In the belenes of Catalonia, there is always the figure of a Catalan peasant, crouching down, doing his “necessities”.

The origin of this tradition is unclear, but what we do know is that, in that area, no nativity scene is complete without this little figure looking for a quiet place to do his “business”.

What’s traditional to eat during the festive season in Spain?

Surely you already know about the turrones, polvorones, mantecados and other typical Spanish Christmas sweets.

But there is one that is only eaten on one particular day of the holidays, probably the most special day of Christmas for adults and children: the day of the Kings.

The most anticipated sweet of the Spanish festive season is also eaten in Latin America and is a bun filled with cream or truffle that usually has candied fruit on the top.

Why is this roscón so special? Because inside it there are some porcelain figures hidden there.

The usual figures inside the roscón are a Magi and a broad bean, although in recent times others are being added.

The tradition of the roscón de Reyes in Spain is that the cake will be cut into pieces for all those present, and the person who finds the Magi must put on the paper crown that come with all the roscones.

And what about the person who gets the bean? He has to pay for the whole cake!

What happens on the last night of the year?

On New Year’s Eve the Spaniards usually have dinner with the family and, after midnight, they usually go out to parties with their friends.

And what about anything special to see in the New Year? The twelve grapes, of course.

The twelve grapes at the end of the year

In the Puerta del Sol square in Madrid, the clock strikes 12 times during the last seconds of the year and on each chime the Spaniards eat a “lucky grape”, one for each month of the year that will begin.

Most Spaniards watch the chimes from Madrid on TV, and eat the 12 grapes with loved ones.

And one more strange fact: in Berchules, Granada, the 12 bells chimes are celebrated again in August. But why you may ask yourself?

It turns out that during the New Year celebration in 1994, the inhabitants of Berchules had a power cut and couldn’t see the New Year’s chimes on TV, so they decided to repeat this celebration for themselves months later, in August, with a much warmer climate.

In Spain there is a very intimate tradition for the last night of the year: to wear some new red underwear for the first time. It is said that it gives good luck and attracts love.

So, did you know all these Spanish festive traditions? Would you like to know more about Hispanic culture and how these holidays are celebrated in other countries in the world?

In my Spanish courses for foreigners I’ll explain many other curiosities about Hispanic life. Would you like to sign up for this linguistic and cultural trip? I’m waiting for your call or email!